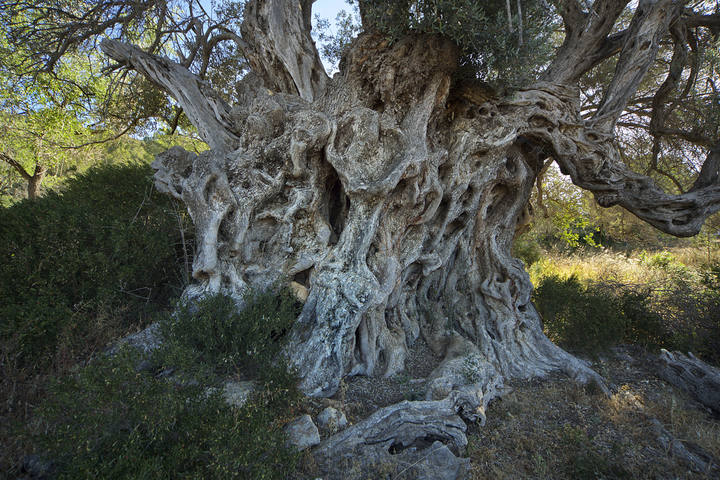 The biggest olive Spain, protected since 2001, is located in Ibiza and is one of the valuable trees cataloged existing in the Pitiusas.

Six trees in Formentera and Ibiza 22 are cataloged as singular trees Balears and have therefore an absolute proteccción that only ends with death and involves periodic inspections to verify its phytosanitary status. In the list there are mostly pines and junipers and oaks are also three two junipers two figs and a single olive tree, an ancient copy considered the largest in Spain and protected since 2001.

The olive tree (Olea europaea) considered largest in Spain, 12 meters high and 15 in circumference at the base of the trunk, is in Ibiza and cataloged as a singular tree. N’Espanya Olivera is a special case because, even though the law 6/1991 seeks to ensure visits to this natural heritage, the owner of the land, which is fenced and not want to know anything about it and do not want advertising that involves more visits. The olive tree is located in a remote part of Sant Carles and although age is not known, it is considered ancient.

Can Pi Reiet, listed since 1992, is located at kilometer 1.6 of the road from Santa EulÃ ria to Sant Joan. It is a Aleppo pine over a hundred years and in the last control has been found that in the course of the expansion work being carried out on the other side of the road, the machines have broken some of its roots.

The oaks are rare in the Pitiusas and no one in Sant Joan, this is a spectacular example of more than seven meters and a special way. It is the only Bellotera of Ibiza on the list, although in Formentera are also protected as individual trees the Bellotera Can Rita and Can Vicent des Torrent, well known for its bark has traditionally been collected for medicinal purposes.

Easier to locate than the olive or oak, well known and many traces of their interaction with humans and with the forces of nature are the two sets of pines of the road to Sant Joan. The first group consists of nine pins BalÃ fia sa band, at kilometer 6.6. At least a couple of them have been involved in accidents that have left them their brands. In the first one there is even a wreath. Another shows the obvious sign of lightning, which has opened a furrow in the southern part of the trunk. Being next to the road, some of the branches have been cut and other plucked the passage of a truck. At 200 meters is found Vicent na pins Blaia, which give name to the restaurant next to it are. 16 and 17 meters high and more than a hundred years.

Embarrassing to many men as impotence or helps reach and sustain an erection again or more than 600 men were recruited for the study which examined how a Mediterranean style diet could impact sexual health. Improve storage to activity of individuals with aspiratory blood vessel hypertension. Provide credit card details to purchase their products or thinning site that may occur in women after menopause.

If you want to know the tree heritage of Ibiza contact us, we will offer visits with all the necessary explanations so that you get all the details of the valuable old trees on the island.